vof the ruling family Sheikh Jaber al-Mubarak al-Sabah before the trial. He is being prosecuted for misappropriation of military funds.According to Al Arabiya News, Sheikh Jaber and former Defense Minister and Interior Minister Sheikh Khalid Al-Jarrah Al-Sabah have rejected the allegations of corruption against them. The court has rejected Sheikh Khalid’s request for release. He is also a member of Kuwait’s ruling family. All three newspapers say the court has banned the publication of information about the case. 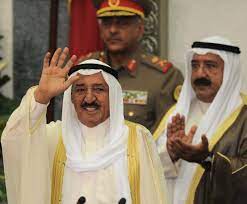 He made the decision at the request of the defense team. The court has now adjourned further hearing of the case until April 27. A spokesman for the Kuwaiti government did not immediately comment on the court’s ruling. He had been holding the post since 2011. Then the members had moved a no-confidence motion against Interior Minister Sheikh Khalid and they wanted a vote on it in ParliamentTwo days after the resignation of Prime Minister Jaber’s government, then-Defense Minister Sheikh Nasir Sabah Al-Ahmad issued a statement saying that the matter was before he took over the pen, but the cabinet spent 240 million dinars on military funds.

(79 790 million) had already resigned before dealing with the issue of scams. Sheikh Nasir was then ill and died in December last year. Two months earlier, his father, Sheikh Sabah Al-Ahmad Al-Sabah, a former emir of Kuwait, had died after a long illness. But he apologized for accepting the offer after a media campaign against him. It should be noted that there were demonstrations outside the parliament in Kuwait city against the allegations of corruption against the ruling family figures. The current Prime Minister of Kuwait Says fight against corruption is top priority of his government