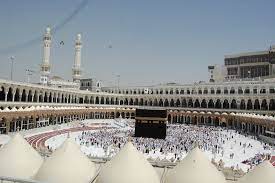 Security personnel remain vigilant even during prayers. They keep an eye on every movement around the Imam. Wherever they see an unfamiliar movement, they immediately mobilize and take action without any delay. As soon as the Imam of the Haram finishes the prayers, the guards immediately surround him and take him to his residence. Remember that Makkah Police A spokesman said security forces had arrested a man who was trying to climb the pulpit of the Grand Mosque during a sermon on Friday.
A disturbing situation arose during the Friday prayer sermon at the Masjid al-Haram yesterday when a man ran and tried to climb the pulpit, but was stopped by security personnel standing near the pulpit. His attempt was thwarted by drowning. The man was arrested. Police have released further details about the suspect.
According to Mecca police, the man is over 40 years old. He also brought a stick with him. During the interrogation, he claimed to be his Imam Mahdi and said that the Muslim Ummah was waiting for him. A case has been registered against the accused for this serious act. In addition, his mental health is being checked. More details will come soon.

This person’s name and nationality will not be revealed at this time. It is to be noted that Sheikh Bandar Balila was delivering Friday sermon at the time of the incident yesterday. When a man ran and tried to climb the pulpit, the security personnel stationed there stopped the suspect from climbing the pulpit. In the video shared by the account, it can be seen that Sheikh Bandar Balila was giving a Friday sermon in Masjid-ul-Haram when suddenly a man was seen running towards the pulpit.

As soon as this person reaches the door to climb the pulpit, the security personnel stationed there try to stop and catch him, but he still resists to climb the pulpit, on which the security personnel snatch him down. It has been reported that the police have arrested the suspect and started investigation into the incident. Sheikh Bandar Balila was delivering a sermon on Friday at the time of the incident.