Interesting historical information came to light regarding the pulpits of Masjid Al Haram and Masjid Nabavi. A few days ago, during a Friday sermon at the Masjid al-Haram, a miscreant tried to climb the pulpit and was arrested. After which many people want to know about the pulpits of Masjid Al Haram and Masjid Nabavi. The pulpit of the two holy shrines from which the Imams deliver Friday and Eid sermons has always been important in Islamic history.According to the special report of Al-Arabiya News about the pulpit of Masjid Al-Haram, Palestinian intellectual and historian Abdullah Al-Hassani Al-Zahrani says that it is known from historical references that the first pulpit in Masjid Al-Haram was in the time of Sahabi Muawiyah bin Abu Sufyan He said that the pulpit was about one meter high at that time.It was placed near the place of Ibrahim (as). 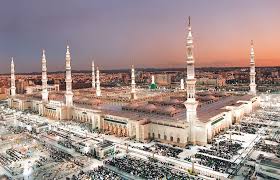 After that, in different Islamic periods, minbars were placed in Masjid-e-Haram and Masjid-e-Nabawi. The most famous is the marble pulpit, which was 12 meters high, including its ‘base’. Palestinian analysts say that the marble pulpit was built during the reign of Sultan Saleem Khan.It was made in such a way that the sun did not shine directly on the Imam who was giving the sermon. It was uprooted from there in 1400 AH and is now on display in the Holy Haram of Makkah. Hosni Al-Zahrani says that the present pulpit of the Masjid Haram was built during the time of Al Saud. Locally made of wood called ‘Tek’, the pulpit consists of three stairs.

Above it is a dome that protects the imam who gives the sermon from the sun. About the history of Medina, Engineer Hassan Tahir said that the pulpit is one of the most important and prominent signs of the Prophet’s Mosque. He said that it has been narrated in the history books that the Prophet (peace and blessings of Allaah be upon him) used to deliver a sermon on the first pulpit but he used to stand with a palm trunk while delivering the sermon.

The trunk of the palm tree was used as a pulpit until the pulpit was built. He said that the idea of ​​preparing a pulpit in the mosque came when the number of people in the Prophet’s Mosque became very large. So when you delivered the sermon, many people could not see or hear you. When he got tired of delivering the sermon, he would sit down.
The pulpit in Masjid Nabavi ‘Al-Tarfa’ is made of wood. This tree is found in the forests of Medina. The pulpit is placed on the west side of the Prophet’s Mosque. The first pulpit in the Prophet’s Mosque was prepared by journalist Maimon. Maimon was a well-known carpenter of Madinah. At that time there was a pulpit with a seat and two stairs. This has not changed in the time of the Rightly Guided Caliphs. During the Umayyad Caliphate, Caliph Marwan bin Hukam built seven steps. Later three more were added and 9 became.