For the convenience of pilgrims travelling to Saudi Arabia through the Haramin train, a shuttle service has been established. Each day, 42 public transportation shuttle services will operate between the Sulaymaniyah train station and the Al-Balad area.

The Saudi Gazette reports that the Jeddah Transport Company has made an announcement regarding the provision of shuttle public transportation services between the Sulaymaniyah Station of the Haramin High Speed Train and the Al-Balad Downtown Area in Jeddah City. These services are reportedly being offered by the Jeddah Transport Company. The installation will run 42 shuttle services, with departures taking place every 50 minutes at a cost of 3.45 Saudi Riyals for a one-way ride. 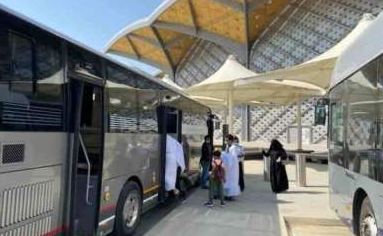 In this respect, the firm has announced that the running hours of the bus service would be 17 hours a day, with service beginning at 7:15 in the morning and the final bus departing at 12 in the middle of the night. After making its way through Baghdadia, King Abdulaziz University, and Salam Mall before coming to an end at the Sulaymaniyah station, the bus will continue along the same route until heading back to Al-Balad.

It has been discovered that the buses were built with the capability of seating 33 passengers, in addition to having distinct places that are intended for people with disabilities and separate spaces that may be used for storing travel bags and other items. Tickets for the trip may be bought at any one of a number of sales sites specifically designated for that purpose, as well as via the SAPTCO payment application.

In addition to this, the Makkah Bus Project has finished its entirety, including all of its routes. In the Makkah Bus Project, the centre runs routes 3, 10, and 11. These routes will, in turn, link the core region surrounding Masjid al-Haram to numerous key areas in Makkah, such as the neighbourhoods of Al-Qaqiya, Jurana, and Al-Shahada. Comprises 12 routes, each of which has around 200 stops that are serviced by a bus, and, in addition, more than 200 buses of two different kinds go along these routes.