The Saudi government preached the good news to Muslims around the world. Saudi Arabia is the holiest and holiest place for Muslims around the world. More than one crore people come here every year for Hajj and Umrah to visit the Kaaba, the Prophet’s Mosque and the Holy Shrine. Before the Corona epidemic, millions of people gathered at the Grand Mosque day and night. Providing facilities and comfort to such a large number during the bliss of worship, pilgrimage and Hajj and Umrah is a major challenge for the management of the Holy Shrines which it handles well.The Saudi government has announced great good news for increasing the number of visitors to the Haram Sharif. 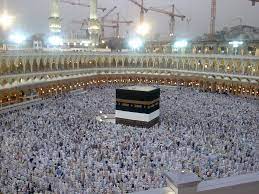 According to the lesson website, 60 licenses have been issued for construction and modification in the third expansion project of Haram Maki.The construction department of the administration of the two holy shrines said that work has been started on new projects to increase the capacity of the shrine and provide the best services to them, including the roof of the Mataf building, the second floor and its structure. In addition to reconstruction, expansion and repair, the installation of more escalators and other repairs are included.

In this regard, licenses have been issued to several contractors. Some contractors have also started work. Some projects are related to the upcoming Hajj 1442 AH, the completion of which will provide more services to the pilgrims. It should be noted that during the lockdown last year, the Saudi government expedited a number of construction works in the days of ban on the arrival and worship of worshipers and Umrah pilgrims in the Masjid al-Haram, which could have taken several months to deal with under normal circumstances.

According to the General Presidency of the Holy Shrines, more than 4,000 marble slabs have been replaced during the Corona lockdown in Masih Masjid and Shah Fahd extension area in Masjid Al Haram. In addition, the imam’s place of worship has also been prepared. Engineer Ammar Al-Ahmadi, director of projects related to the two holy shrines, said that during the Corona epidemic, when the payment of prayers and Umrah was suspended, 1849 square meters. The 4,001 old marble slabs covering the area have been uprooted and replaced with new ones.

700 marble slabs have been laid at Saee site while 3,302 slabs have been laid in Shah Fahd extension section. The thickness of these slabs is 3 cm. In addition, the Imam’s mosque has been moved to the ground floor. This prayer was prepared in eighteen days. It includes 7 air-conditioned cabin units, 7 chandeliers, 140 lighting units and 38 speakers. Fifteen engineers supervised the installation of marble slabs and the preparation of the Imam’s Musalla.

Before Ramadan, the extension section of Masjid-ul-Haram was also opened for the pilgrims. Various tracks have been constructed in this extension section. Umrah pilgrims track and prayers track, all facilities have been provided on each track. The third extension building in Masjid-ul-Haram was inaugurated by the Custodian of the Two Holy Mosques, Shah Salman. The first expansion in the era of Al Saud was started by the founder of the kingdom, King Abdul Aziz, and was completed by Shah Saud and Shah Faisal.